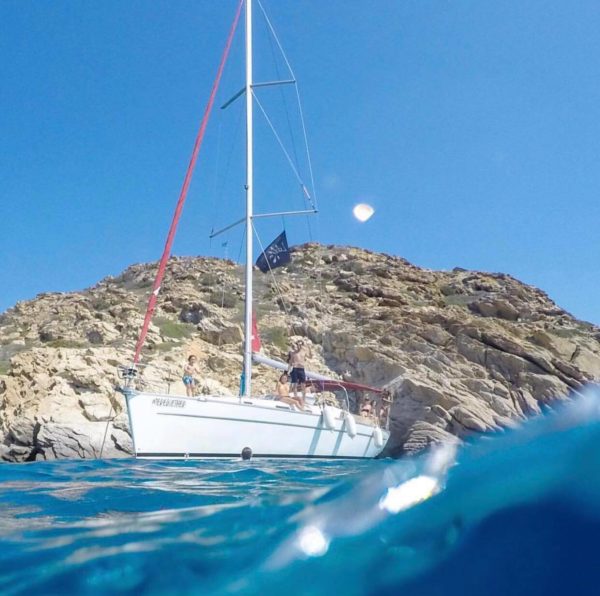 These days travel is so important to everyone whether they enjoy a relaxing holiday, backpacking on a budget and seeing the world on a guided tour and some people love exploring the world by sailing. Meet Kieran Wyse an Australian enthusiast from New Castle New South Wales, sailing across the Mediterranean on his boat ‘Merewether’. After meeting Kieran for the first time at Harmony I learnt a great deal about his passion and vision for his future. Kieran he has spent years backpacking and traveling the globe, in 2015 he first visited our little Island called Ios and fell in love with the Mediterranean, admiring the yachts and catamarans sailing around with the freedom to explore wherever they wished, gave Kieran a new desire with travel. After traveling back to Ios for two summers Kieran started to dedicate his time into researching potential boats to buy in Europe to start his sailing dream. ‘Merewether’ soon came into fruition late 2017 purchased in Croatia and his sailing certification followed the next January in Australia.

Now Kieran had the means and the solid plan of sailing to travel the world using his vessel as a home and a ways of transport. Since summer 2018 his journey on the ‘Merewether’ Kieran has documented his travels on his YouTube channel “Sailing Merewether” capturing breathtaking footage and sharing his experiences, passion and knowledge. To get the true feeling of kieran’s vision of Merewether jump onto the channel and follow him on instagram @kieranwyse.

On the flip side to such a lifestyle comes the reality of financial support and funding his endeavours. Kieran put all his savings into making this dream come true with the inspiration to eventually sailing back to Australia. His YouTube Channel has been Kieran’s platform to reaching his supporters and building a career in international travel video blogging/photography.  He is hoping to reaching as many supporters as possible to steer his career to his home port.

What a true inspiration Kieran and Merewether are! We have enjoyed watching his ups and downs traveling from Croatia, Montenegro , Albania, Greece and more.

I cross paths with lots of amazing people dining and sharing stories over cocktails at Harmony, always giving encouragement and support to those brave enough to make that leap of faith to follow their dreams. Taking on Harmony was a huge chance for me coming from Australia to peruse my European dream and I couldn’t be more happy after coming to Ios in 2012. Harmony fully supports Kieran in his future ventures and we look forward to seeing his successes.